What is Mass Balance?

Mass balance is the difference between the amount of snow and ice accumulation on the glacier and the amount of snow and ice ablation (melting and sublimation) lost from the glacier. Climate change causes variations in temperature and snowfall, changing mass balance. This is considered the most best mesure of glacier response to climate change. Changes in mass balance control a glacier’s long term behavior. This is just like your bank account with accumulation being deposits and ablation being withdraws.  A glacier with a sustained negative balance is out of equilibrium and will retreat. A glacier with a sustained positive balance is out of equilibrium and will advance. If a glacier still has a sustained negative balance after a period of significant retreat the glacier is likely in disequilibrium and will not survive, as it has no significant annual accumulation area.  Above you will find a series of links exploring North Cascade, North American and Global glacier mass balance. The North Cascade Glacier Climate Project monitors the mass balance of more glaciers than any other in North America. The World Glacier Monitoring Service annually compiles the mass balance measurements from around the world and has found the last 34 consecutive years to have a mean annual negative balance loss.  The mean cumulative mass balance loss has been -17.2 m w.e., which is a 19-20 m of glacier thickness lost. The mean thickness of the several glaciers investigated by geophysical methods ranges from 30-60 m, each glacier observed was larger than the mean of North Cascade glaciers or the mean of glaciers observed by NCGCP.  Thus, at least 30% of the volume of these glaciers has been lost since 1984.

How is it measured?

Accumulation is measured by either probing or crevasse stratigraphy to determine the annual snowpack thickness at many locations.  Crevasse layering is evident in the picture at right.  It is similar to reading tree ring width for climate analysis.  These measurements are completed both in August and again in late September, the end of the hydrologic year, each summer on 10 glaciers in the North Cascades by NCGCP.  Measurements of ablation are made at 3-6 locations and accumulation at 60-200 locations. The impact of the number of measurements is examined in The Impact of Sampling Density on Mass Balance. The changes in accumulation and ablation with location and during recent years indicates the importance of monitoring multiple glaciers as they are unique.  Crevasse stratigraphy is used to determine annual snow layer thickness.  In the slide at  right you can see four annual layers.  A thin surface layer, and than two approximately one meter thick layers, and then a partially shown lowest layer that is much dirtier.  The continuity of the layer thickness provides a better measure than a point measure in a snowpit or with probing.  We utilize probing where crevasses do not exist, above right.  Snowpits such as seen at lower left are not used in the North Cascades since the density of the snowpack by August has been found to be constant.  Snowpits provide a point measurement and are time consuming.  They are crucial for determining snowpack early in the melt season when the density does vayr, not Zillmer Glacier, BC below. A map is generated from this network of mass balance. Below is an example from Columbia Glacier in the North Cascade Range, WA, a WGMS reference glacier. 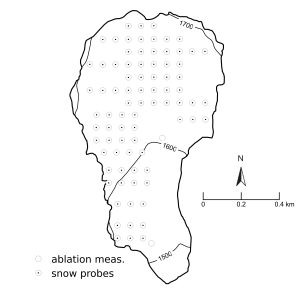 Map of the measurement network on Columbia Glacier. 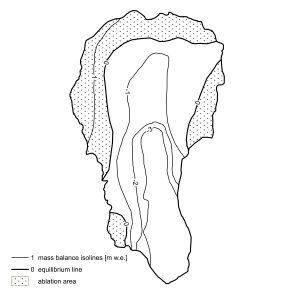 Map of the mass balance of Columbia Glacier in 2016.