Lyman Glacier which feeds into Lyman Lake and then Railroad Creek in the Lake Chelan drainage of the North Cascade Range, Washington has retreated a total of 1330 m from the 1890 moraine. In 1929 year the terminus position was mapped by the Washington Water Power Company, which provided hydroelectric power for Holden WA.. The Washington Water Power Company emplaced a benchmark from which to measure retreat of the glacier which they monitored from 1929-1940. They found the glacier retreated 195 m from 1929-1940, and 530 m from the Little Ice Age Maximum to the 1940 position. William Long visited the glacier with this party in 1940 and returned to the glacier for his honeymoon with Kathleen on leave from the 10th Mountain Division in 1944. In 1988 and 1990 Bill retured for the first times since 1944, with us, pointing out the benchmark. From 1986-2022 we have surveyd the terminus of this glacier in the field during 15 different summers. Lyman Glacier retreated 11 m/year 1940-1986, 11 m/year from 1986 to 2008, and 5.5 m/year retreat from 2008-2022. Retreat since our first field observations in 1986 has been 298 meters, 800 meters since 1940.

The area of the glacier in 2022 is 0.22 km², which is less than 13% of the 1890 area of 1.72 km². The glacier was noted to be in disequilibrium with climate and would melt away with current climate by Pelto (2010). From 1986-2008 the glacier reamined  thick in the middle, over 40 m, as evidenced by a significant ice cliff into the lake. In 1986 this ice cliff maximum height was 15 m. The height increased to more than 20 m by 2003 and reached a maximum of 24 m high in 2008.. By 2011 the ice cliff had diminished to 15 m, and by 2022 to 2.5 m. The current glacier length is 360 m on the eastern portion and 400 m on the western portion. With retreat the slope in the glacier center has increased from 16 to 25 degrees from 1986-2022. The continued retreat at the 50 year retreat rate would eliminate the glacier in 35-50 years, but a simple extrapolation is typically not a good approach to determine when a glacier disappears. In 2008 we noted that the “glacier was still quite thick and should slow its retreat once the bedrock slope begins to increase, and the minor lake calving ceases.”  Without a terminus ice cliff crevassing near the front has greatly diminished indicating that the terminus acceleration due to the ice cliff no longer exists. This retreat rate has slowed, while the rate of thinning due to mass balance loss has remained high ~1 m/year. The headwall also is the location of greatest avalanche accumulation, which also will slow retreat. 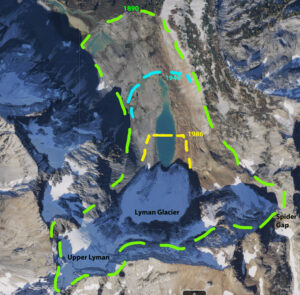 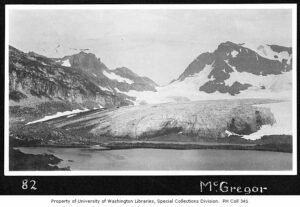 1921 Mountaineers Expedition view of Lyman from the first upper Lyman Lakes shoreline (University of Washington Library), near the 1890 terminus position. Note the glacier is connected to the arm leading to Spider Gap top center. 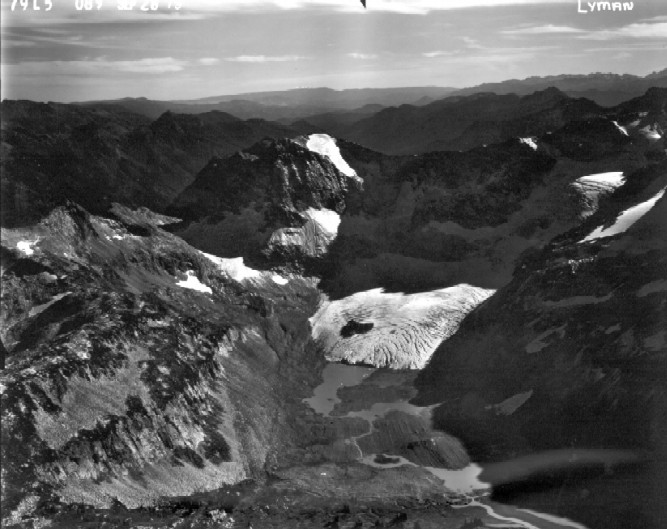 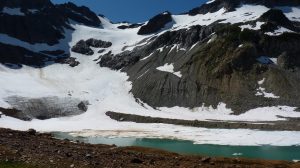 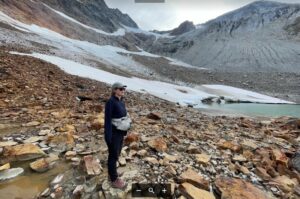 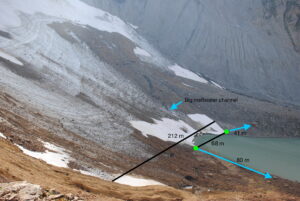 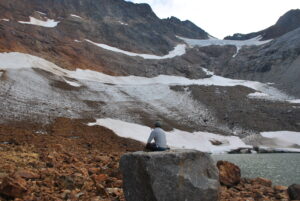 Lyman Glacier 2022 with annotated measurements from the 2008 terminus locations and of terminus condition. Kevin Duffy on the terminus rock. (Jill Pelto-Images)