Published in Hydrologic Process is a paper from our 28 years of research on Mount Baker.
“Mass Balance Loss of Mount Baker, Washington glaciers 1990-2010” Mass balance is really the annual bank account for the glacier. Deposits are snow accumulation, withdraws are melting. A glacier that has greater income has a positive mass balance and increases in volume. Greater melting leads to losses in volume. This data has been updated with the publication 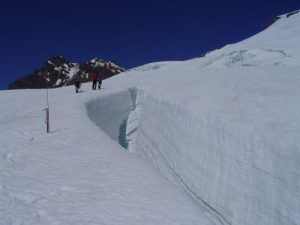 Mount Baker,North Cascades, WA has a current glacierized area of 38.6km2. From1984 to 2010, the North Cascade Glacier Climate Project has monitored the annual mass balance (Ba), accumulation area ratio (AAR), terminus behavior and longitudinal profiles of Mount Baker glaciers. The Ba on Rainbow, Easton and Sholes Glaciers from 1990 to 2010 averaged 0.52 m water equivalent per year (m/year).
Terminus observations on nine principal Mount Baker glaciers, 1984–2009, indicate retreat ranging from 240 to 520 m,with amean of 370m or 14ma1. AAR observations on Rainbow, Sholes and Easton Glaciers for 1990–2010 indicate a mean AAR of 0.55 and a steady state AAR of 0.65. A comparison of Ba and AAR on these three glaciers yields a relationship that is used in combination with AAR observations made on all Mount Baker glaciers during 7 years to assess Mount Baker glacier mass balance. Utilizing the AAR–Ba relationship for the three glaciers yields a mean Ba of 0.55 m/year for the 1990–2010 period, 0.03ma1 higher than the measured mean Ba. The mean Ba based on the AAR–Ba relationship for the entire mountain from 1990 to 2010 is 0.57 m/year. The product of the mean observed mass balance gradient determined from 11 000 surface mass balance measurements and glacier area in each 100-m elevation band on Mount Baker yields a Ba of 0.50 m/year from 1990–2010 for the entire mountain. The median altitude of the three index glaciers is lower than that of all Mount Baker glaciers. Adjusting the balance gradient for this difference yields a mean Ba of 0.77 m/year from 1990 to 2010. All but one estimate converge on a loss of 0.5 m/year for Mount Baker from 1990 to 2010. This equates to an 11-m loss in glacier thickness, 12–20% of the entire 1990 volume of glaciers on Mount Baker. 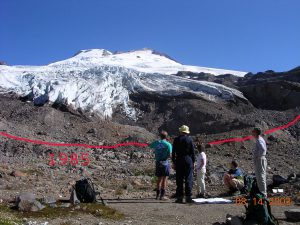 The two key measures of mass balance, which is direct measurements and measuring the snow covered fraction of the glacier at the end of the year, the accumulation area ratio. Below is the 2009 map of the snowcovered areas put together by Courtenay Brown, Simon Fraser University. This same year we were in the field and took measurements at the burgundy dots, in the second image. Each dot is worth three measurements. In two weeks we will adding more measurements to this data set for 2012. We do this largely by using a probe that can be driven through the snowpack from last winter, or in crevasses where the annual layering is evident like tree rings. The contrast between the snowpack distribution in September 2009 and 2011 is evident. The burgundy arrows point out bare ice regions. In 2009 the bare ice extent darker blue, was much larger than in 2011, when snowcover was quite good. The net trend over the last 20 years of mass balance loss is leading to the ongoing retreat of all Mount Baker glaciers. 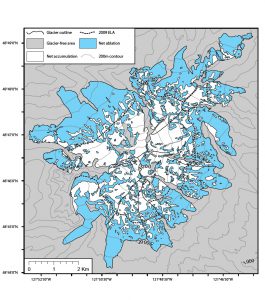